Is 1899 Worth Watching On Netflix?

It seems like the Europeans are taking over Netflix lately. Another big hit of foreign language content became number one on Netflix. But is the show keeping up with the hype? Let’s find out if 1899 is worth watching on Netflix!

In October 19,1899, a ship called Kerberos sails from England to New York city with a bunch of European migrants to start a new venture. Four months ago, Kerberos’s sister ship Prometheus lost its way to the same route. Unknowing what happens in the future, the ship sails.

The story starts with Maura Henriette Franklin who is one of the first female doctors in the UK, travelling to New York to expand her career.

In the ship, Krester, a passenger from the third class compartment rushes into the first class component to look for a doctor. He gets thrown out by another first class citizen but Maura follows Krester’s lead. She faces a medical condition of cutting an umbilical cord.

Suddenly, Maura gets strange visions. She meets with the captain of Kerberos, Eyk. Eyk tells Maura not to follow the ship’s rules. Eyk receives some message from Prometheus to change some courses. The passengers become angry. Eyk sees the abandoned ship and boards with Maura, Ramiro, Olek and Jerome.

Eyk receives a message from the shipping company with only two words ‘Sink Ship’. Maura explores the ship and finds a scarab bottle which leads her to find a boy. She finds a ring and notices the boy who hands her a black object. She also notices he has a triangle shape behind his ears.

Eyk keeps hallucinating his family who died in a fire a few years ago. Eyk sees a hairband similar to his daughter in Prometheus. Suddenly Eyk decides to sail Prometheus back to Europe which makes the passengers angry. 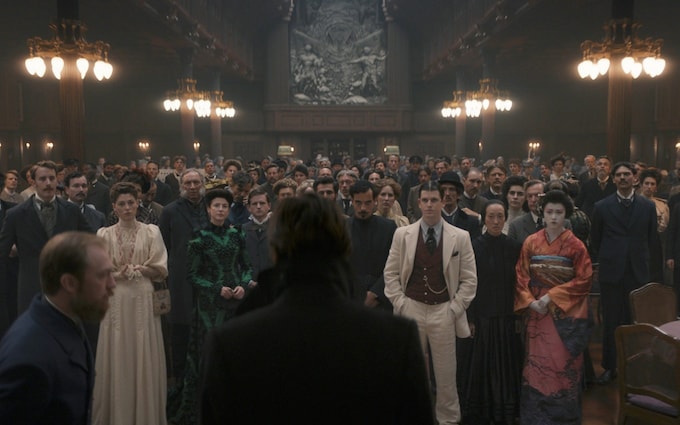 Maura shows the boy a letter which had a similar triangle sign. But the boy stays mute. Various other incidents also happen including Anker’s daughter Ada’s death. No one knows what caused Ada’s death. Kerberos falls into deep fog and Eyk orders the ship to stop. Eyk shows Maura the headband which leads them to further investigate Prometheus.

Eyk tells Franz to keep Ada’s death a secret. Franz disobeys Eyk and tells this to his wife, Tove. Tove retrieves Ada’s body. Eyk and Maura find more clues regarding the triangle in the ship.

Apart from Ada, they discover more bodies in the ship. Ling Yi gets a flashback of her friend’s accidental death before boarding this ship. She had an argument with her mother finding out her practising to be a Geisha.

Meawhile, Olek finds Ling and comforts her. Later while she was entertaining Lucien, suddenly, his wife Clemence enters and interrupts the fun.

Franz becomes furious with Eyk’s decision of returning the ship back to Europe. He tells his wife Tove to find mutiny in the ship. Olek tries to stop Eyk but gets beaten up by Jerome and as a result, he gets locked up.

Later, the mutineers find Eyk and arrest him after following the lead of Tove. Maura’s husband Daniel finds a device which leads him to solve the puzzle in Kerberos and teleports it. After various drama, Maura finds out the passengers were in a simulation created by her father. Eyk does not believe her and leaves. Maura takes Eyk to Daniel’s room to reminisce about the memories of his family.

The mystery boy turns out to be Elliot. Henry injects a substance in Elliot which leads him to unlock a similar memory which resonates with Maura. Daniel hacks into the simulation and helps everyone who is going through it. Later, Daniel reunites with Maura. He tells Maura that Ciaran took over the program. When Daniel is about to leave, he promises Maura that he will always be there for her.

Meanwhile, Maura slowly regains consciousness and finds herself in a starship named Prometheus, with everyone she saw in Kerberos. On the computer screen, she sees the date 19th October, 2099. The date shocks Maura and she hears Ciaran welcoming her to reality.

Want to read more content like this review of 1899 on Netflix? Check out our section of TV show & movie reviews!

Previously known for creating another German Science fiction thriller series Dark, Janjte Friese and Baran Bo Odar announced on Instagram that they are writing another series of the same genre. The primary language of the series is German.

Other languages of Europe such as Polish, French, Spanish, Portuguese, Danish, Swedish, Norwegian, Cantonese and English were spoken as well. The cast of this series are from different countries. Each cast was given the opportunity to speak their native language.

The shooting started in UNESCO Creative City of Film in Potsdam, Germany and the United Kingdom. 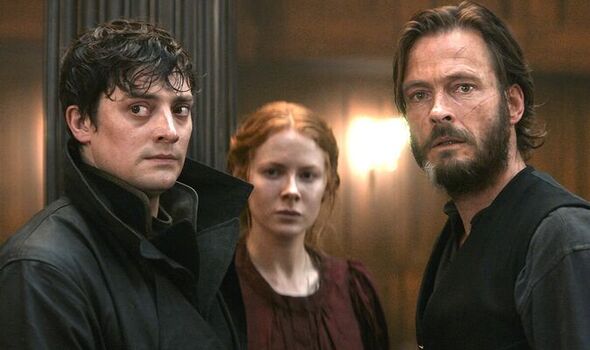 Previously known for his character in Spanish Teen drama Elite, Miguel Bernardeau plays a significant role in this series. He plays Angel who is a wealthy Spaniard travelling to New York.

The budget of this series is 60 million euro. By far, this is the most expensive series ever made in Germany.

The series will occur 3 more seasons like Dark. The script writers have already created a plot which will lead the series for a few more episodes. Each episode is around 52-60 minutes.

Do check out our review on Enola Holmes 2 as well!

After its release on 17th November, 1899 has become number one in 58 countries on Netflix.

IMDB rated this series 8.8 out of 10 based on 40 generally favourable ratings. Rotten Tomatoes has given the series 83% stating that it did justice to Dark. Google users have given the series 91% upvotes.